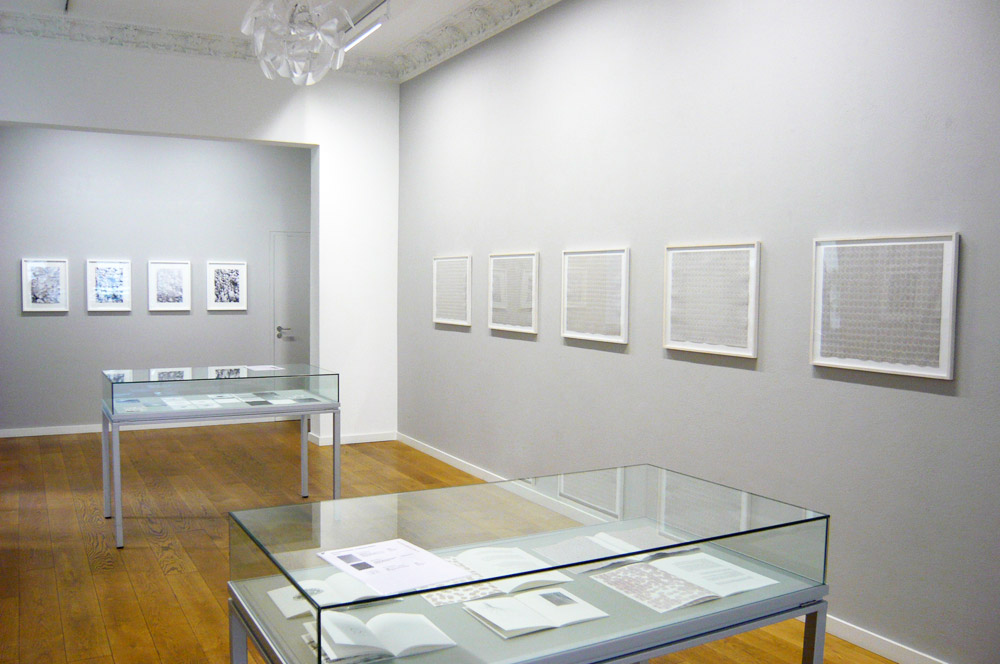 Cologne-based artist Nora Schattauer (*1952) has been always implicitly in dialogue with the photographic oeuvre of Alfred Ehrhardt. Like Ehrhardt, she examines universally valid, ever-recurrent principles of form in nature and proceeds with scientific systematicity. Her works, developed using diverse materials, visualize analogies of form that are shaped in various media. In the process her attention is turned to the flux of natural constructions, the osmotic movements in the micro range, the flowing. With the exhibition, Optische Mitte she deals explicitly with Alfred Ehrhardt’s best-known image series, Das Watt.

On show will be blind drawings on carbon paper, photograms, photographs, so-called silver leaves – in which saline solutions applied by pipette react chemically with one another – plus a selection of exclusive artist’s books.

Schattauer’s drawings through carbon paper were inspired directly by Alfred Ehrhardt’s abstract records of sand structures on the North Sea mud flats and were created according to observations on the beach. Her blind drawings are aesthetic attempts, created before the mind’s eye, to have the apparent conflicts between human intellect and subordinate nature literally flow into one another. They show arcs that start afresh time and again, they investigate the effect of forces, the developments of flowing movements in the malleable material. And they explore the question of how perception works while, as a result of a certain, intuitively guided shaping process, an abstract structure comes into being. With blind drawing the eye follows individual lines, although the consciousness surveys the whole at the same time. Integral to the image is the understanding that perception of the sea or of the sea bed on the mud flats oscillates constantly between two manners of gazing: the horizontal, imaginative gaze into the distance; and the analytical gaze, directed at the ground, which observes the currents and structures in the sand.

At the same time the photograms and photographs by Nora Schattauer show flow processes that build photographic analogies with the drop shapes of the silver leaves. In order to produce the silver leaves, in a method comparable with that of analogue black-and-white photography silver and salt are exposed to the light and prompted to form specific color values. Salts – unlike pigments – are dyes that are fully water soluble. First of all, silver nitrate, subsequently an ammonium chloride solution is dripped through a pipette onto an extremely open-grained, Japanese chromatography paper which, due to its structure that expands when liquid is applied, becomes part of the production process, while the artist has no means of fully controlling this course. The result varies between the extreme contrasts of a precise arrangement in bars and grids, evoking associations with cell structures, and asymmetrical chaos, depending on how evenly or randomly the artist has gone about distributing the liquid. These »visual experiments« are images that illustrate the flow forces that occur between inorganic materials, and thereby investigate a principle of liveliness in nature, as is also characteristic of Alfred Ehrhardt’s photographic works.

»This is, so to speak, a pictorial process, growing towards us out of the depth of its visibility. The image surface, insofar as it is present at all, appears as an inseparable unity of material and its complete substantial penetration. This process is an allegory of artistic creativity and, additionally, of any way of thinking that is devoted away from the surface to deeper layers. As the pictures by Nora Schattauer identify, it is only here that order, harmony, is created, something that we call beauty and which ultimately as a utopian concept looks out for consonance between the soul and nature, for the unity of mind and material.« Eugen Blume, in: Nora Schattauer. Silbern, Revolver Publishing 2011.