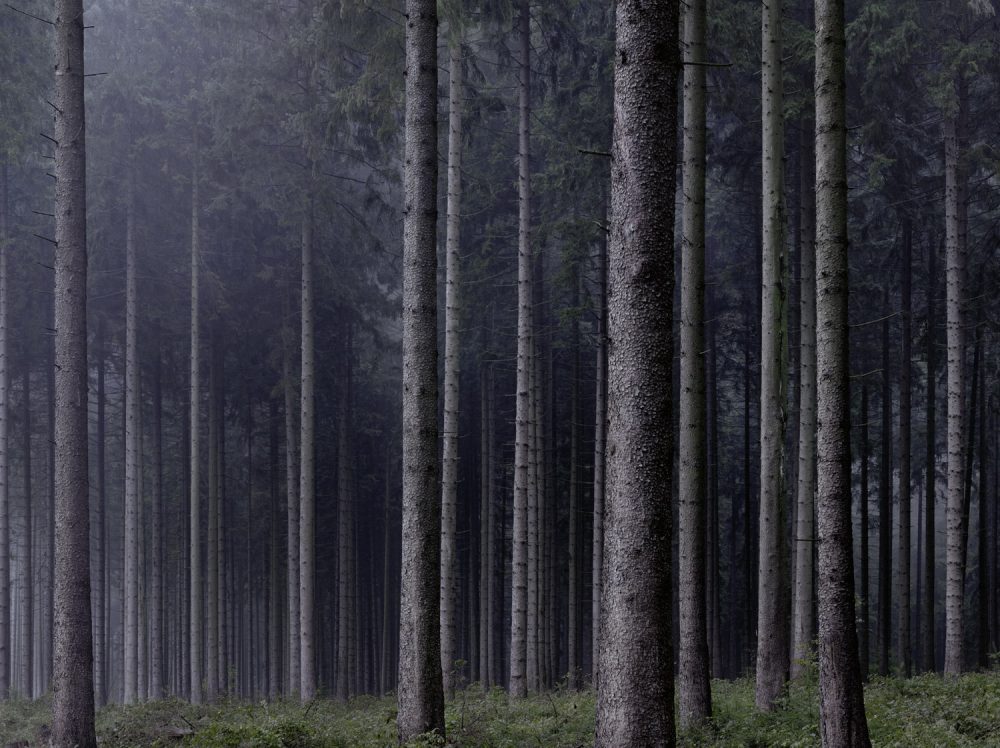 The idea of the forest has been imaginary for centuries. Through fairytales and mythical narratives, the forest has emphatically written itself into collective memory. In it, the forest’s visual substance mostly sees itself as a psychic area of retreat, in which childish longings and fears can live on. Yet in what way does the regressive foil presently cloud our civilization-based perspective of the forest? What does it mean concretely, what do we recognize, when we visit the forest?

Michael Lange has pursued these questions in his current book and exhibition project Wald (Forest). For three years, the Hamburg-based photographer roamed Germany’s forests during the twilight hours. With unfailing intuition, he found there those places of retreat in which the imaginings of childhood condense, in sober nature documentary form, into impressive visual coinages. His photographs were created beyond the paths and hiking trails, often in the thicket and dense undergrowth. They testify to the delayed hazardous enterprise of the adult Self, finally to arrive at the place for which the childish soul has yearned over all these years. The photographs by Michael Lange are a foil, they can absolutely be understood as the result of an inner stirring. The works are determined by the repeatedly raised question of how silence can take shape in the image.

However, the landscape-format color shots are, equally, documents of a sober external exploration. Lange’s forest scenarios are distinguished, in the sense of making sure, as deliberately timeless shots of nature, looking equally mythical and real. His motifs are atmospherically pervaded by profound peace and loftiness. At the same time, it is one of the images’ peculiarities that they hold back a secret when viewed. Evidently they intend to reveal or conceal nothing. They also do not persist in calculating the impression. Instead, they draw from the moments of the dwindling or awakening light that accompanies the dusk a concentrate that can almost be called tender. Somberly and, as it were, presently, the forest realm emerges from them.

In the forest, a scholar once said, man’s subjective categories fail. Out of this irritation, a heightened watchfulness inevitably results. In the photographic images of Michael Lange, an artistic strategy has grown out of this vigilant experiencing magnified many times. This strategy is probably best compared with that form of experience for which the poets of German Romanticism invented a specific term: Sylvan solitude. (Text: Prof. Dr. Christoph Schaden)