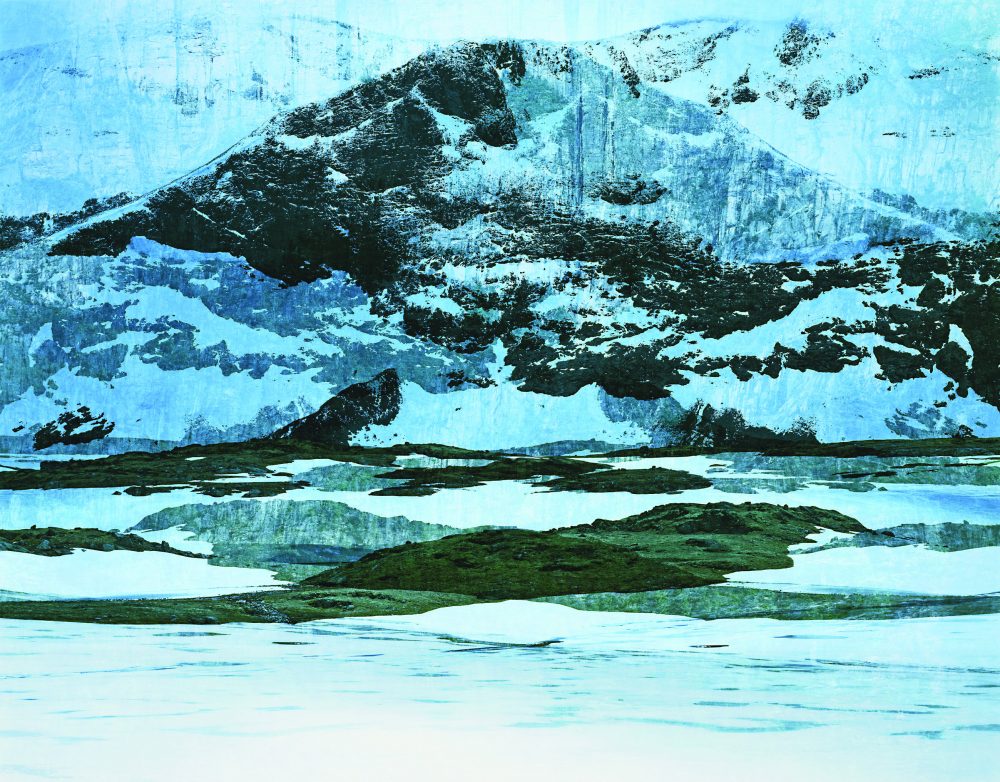 Charles Compère’s work in Germany spans five decades. A master of analogue colour photography, he has taught generations of photographers this technique and his command of the medium remains almost unparalleled. Compère’s large-format photographs of cliff formations in Norway and the Alps move every viewer who sees them. As testimonies to his sensitivity for nature, his mountain landscapes are impressive, not only for their stillness, stark natural beauty, and richness of detail. They also fascinate the viewer with their layers of complexity. The images are multilayered, in the literal sense of the word. The artist exposes a single 8 x 10 inch (20.3 x 25.4 cm) slide multiple times to create temporally and spatially disparate impressions. These double or multiple images form gleaming layers of natural structures, which evoke a general sense of a natural space viewed in stages but non-existent as such at the moment of the photograph. Individual exposure’s fine gradations in colour fuse into compositions of abstract texture – of rocks, trees, bushes, and mountain streams – in which the superimposed layers emit a resonance of vibrations and give the impression as if one motif is reflected in a layer above or below. Thus the rock formations and vegetation that initially seem true-to-life only become decipherable as idealized views of nature upon closer view. The landscape is distilled into a “concentrate” of nature through the abstraction and framing of the cropping and the layering of the motifs.

Charles Compère (* 1935) is a freelance photo designer and landscape photographer. He founded the Studios für konzeptionelle Fotografie (Studios for Conceptual Photography) in Leverkusen in 1970 and has taught at universities, art academies, and colleges. He was nominated as a member of The German Association of Freelance Photographers (BFF) and The German Photographic Association (DGPh), and he is an honorary member of The German Academy of Photography (DFA). His photography has been published in international magazines, newspapers, and books; his work has been shown in numerous solo and group exhibitions; and it is included in public and private collections.

In addition to Charles Compère’s large-format colour photographs of mountain landscapes, also on view are Alfred Ehrhardt’s (1901–1984) photographs of lava and basalt formations, which he took during his two-month film and photo expedition to Iceland in 1938. The largely abstract compositions reflect Ehrhardt’s interest in the geometric and amorphic structures of volcanic stone and are a reflection of his training at the Bauhaus in Dessau, where the introductory course (Vorkurs) explored the structure, texture, and shape of natural materials.

The encounter between the works of these two artists reveals that despite the fundamental differences in their artistic approaches, an eye for structure fundamentally informs both artists’ sense of composition.