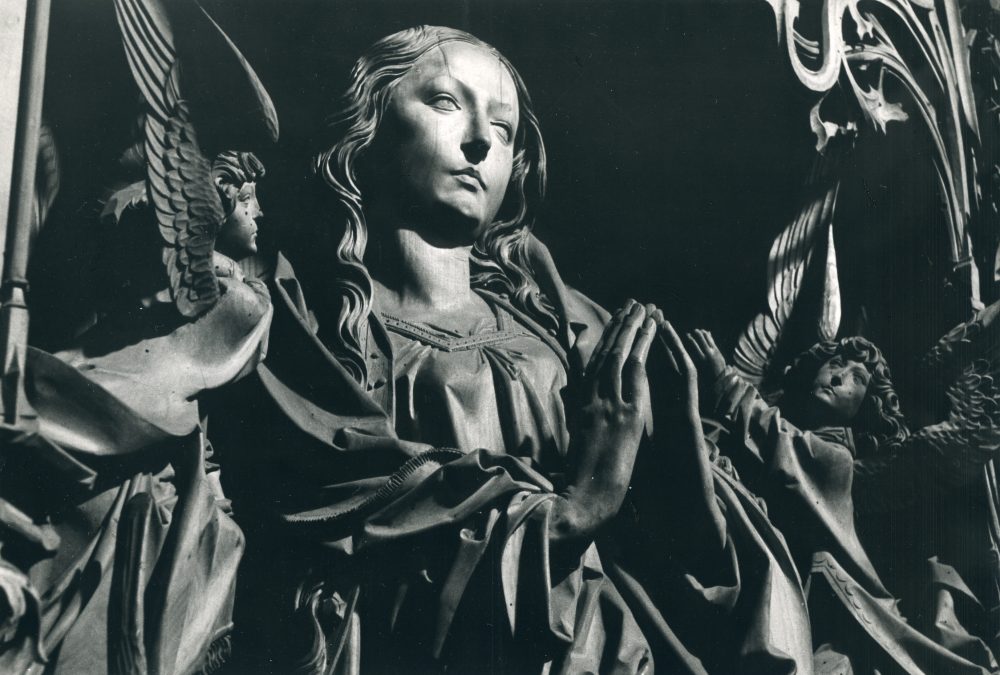 The photographer and filmmaker Alfred Ehrhardt (1901–1984) started his own cultural film production company in 1948 with the support of the British occupation forces in Hamburg. His first post-war productions were dedicated to significant artists and works of art, such as his film on the Bordeholmer Altar in Schleswig and the two-part cultural film on the life and oeuvre of the German sculptor Ernst Barlach (1870–1938). In 1954 together with his assistant Wolfgang Treu he shot the documentary Begnadete Hände: Tilman Riemenschneider, seine Zeit, sein Leben, sein Werk (Gifted Hands: Tilman Riemenschneider, his Time, his Life, his Work) on the famous German carver who was active around 1500, the transition period from the Late Gothic to the Renaissance era.

Accompanied by a soundtrack of musical works from the 15th and 16th centuries, the film shows well-known and lesser-known altar screens and figures of saints by Riemenschneider, which were located in Würzburg, smaller towns in the Frankish countryside and a number of German museums. Ehrhardt was responsible for the screenplay, direction, camera and editing. The 77-minute black and white feature film premiered in German cinemas in 1955.

As the subtitle indicates, the film consists of three parts: it first deals with the era in which Riemenschneider lived, then his biography and finally his work. The third part of the film clearly differs from the preceding parts. While the poet Manfred Hausmann explains the historical and biographical context of Tilman Riemenschneider’s work, the third part forgoes commentary. Short and incisve, it is accompanied only by quotes from the Bible. This section deals with the mature work of Riemenschneider, such as the Altar of Mary in the Church of the Lord God in Creglingen, the Holy Blood Altar in the Church of St. Jacob in Rothenburg ob der Tauber, the Altar of the Crucifixion in the Church of St. Peter and St. Paul in Detwang and the Lamentation of Christ in the Church of St. Afra in Maidbronn. Through stunning lighting the works of the carver are revealed in their full glory.

»[The film] attempts to familiarize people today with the magnificent and timeless art of Tilman Riemenschneider through images, text, passages from the Bible and old instrumental and choral music,« explained Alfred Ehrhard in 1955.

»… Stunningly lit and marvelously photographed, the exquisite works are introduced. It is to the credit of Alfred Ehrhardt … to have thus created a documentary film dedicated to the work and person of Tilman Riemenschneider, which thanks to its artistic and yet still popular appeal is not only attended by members of the public interested in art. Palpable is the well-founded knowledge, dedication, understanding of art and expert mastery of the media of film through which Alfred Ehrhard has made this film a masterpiece.« This text was published in the trade magazine FILM-Echo.

Through the Federal Minister of the Interior at the time, Dr. Gerhard Schröder, Ehrhardt’s film received a commendation from the cultural film award jury, and it was recognized with a prize of 5,000 DM. Also in 1955 the Film Assessment Board of the German Federal States in Wiesbaden merely assigned the film a rating as »worthwhile.« Although Ehrhardt corresponded with the Film Assessment Board and one of its members and although the film consistently received positive critiques and was awarded the aforementioned prize due to its outstanding quality, the central board did not budge from its original opinion and refused to award the Riemenschneider film its highest rating. The exhibition is dedicated to both the cultural film as well as 60 photographs from the series that Ehrhardt completed in parallel with shooting the film. Rare original documentation is also being exhibited publicly for the first time.