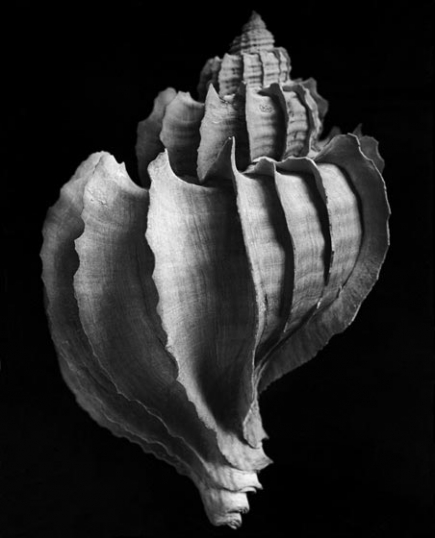 The photographer and cultural filmmaker Alfred Ehrhardt (1901–1984) is well-known for his photographs, rooted in the style of New Objectivity, of corals, sponges, mussels, snails, see urchins, starfish, crystals and stones, which he took in numerous natural history museums in Europe. These natural objects were housed in royal wonder cabinets both for the purpose of scientific study and because of their pure beauty and wealth of forms. They were then made available to the public in natural history museums and finally transformed into a true-to-nature image by the photographer. In this manner nature was not only preserved as a physical object but also as a photographic image and was thus made accessible to an educated middle class hungry for knowledge.

Ehrhardt illustrated nature’s richness of form and regularity by using a typological system and scientific mode of depiction. Subscribing to the notion of vitalism that was characteristic of his era (for example: Henri Bergson’s élan vital), he viewed the diverse forms that appeared in nature as a sign of an overarching creative plan in the sense of a pantheistic natura naturans, which considers humankind and the products it creates to be elements of nature.

He was convinced that the analogy of natural forms in Kunstformen der Natur (Art Forms in Nature) by Ernst Haeckel and Urformen der Kunst (Archetypal Forms in Art) by Karl Blossfeldt manifests a cosmological force, which equally permeates the forms of both the microcosmic and macrocosmic universe. Considered an essential object of study, nature became a point of departure and source of inspiration for his artistic oeuvre.

Including 70 original photographs, the exhibition is supplemented by a screening of the prize-winning documentary films Spiel der Spiralen (Play of Spirals) (1951), Tanz der Muscheln (Dance of Mussels) (1956) and Korallen, Skulpturen der Meere (Corals, Sculptures of the Sea) (1964).