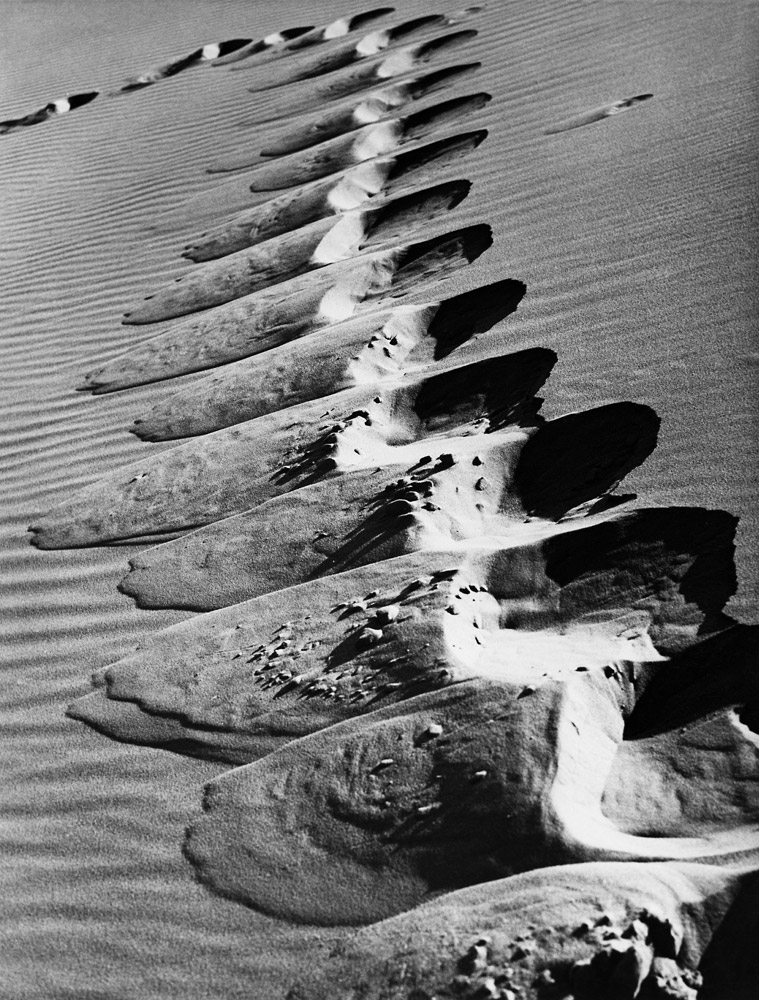 The programmatic emphasis of the first four exhibitions of the Alfred Ehrhardt Foundation was conceived to provide a dialogue between contemporary photography and the work of Alfred Ehrhardt on the theme of »nature.« Now, for the first time following the exhibitions and events in the first year of the foundation’s new beginning in Berlin, the Alfred Ehrhardt Foundation is dedicating an exhibition exclusively to the works of the fine art photographer himself, whose name the foundation bears and whose work it owns and oversees. The exhibition offers a historical look at a precisely defined period in the reception of Alfred Ehrhardt’s photographic works: the images and texts he published in the magazine Volk und Welt between January 1940 and June 1944, supplemented by then unpublished images from the archive of the magazine.

The cultural magazine Volk und Welt was in operation from 1934 to 1944; it appeared once a month in Hanover and was edited by Prof. Oppermann.  Its position was folkish, nationalist, and tended to reflect the leanings of the conservative, educated middle class. In self-advertisement, the magazine characterized itself as follows: »Germany’s monthly magazine Volk und Welt—the major magazine for the discerning taste is a uniquely outstanding achievement! Volk und Welt cultivates art, knowledge, and entertainment in ideal form. Every—hard bound—volume offers over 160 pages of valuable content, with 60 illustrations, some full-page, on the best art paper.« The magazine, which had a predecessor titled Ernte, also edited by Oppermann, became a success with its new programmatic name and revised, modern design. Whereas in 1934 it had a circulation of 5,000, by 1938 it had already reached a circulation of 47,000, a distribution level that was maintained until the end. The increasing use of good photography in the editorial concept played a decisive role in the success story of the publication’s modernization. There was hardly an important name of the 1930s that was not among the photographers who published there. One of them was Alfred Ehrhardt.

The picture archive of the magazine Volk und Welt included a total of 25,000 photographs. In the possession of a private owner in Hanover as of 1945, the archive was sold to West Berlin in 1981. Two cultural institutions, the Picture Archive of the Prussian Cultural Heritage Foundation and the Berlinische Galerie made a joint purchase of the collection, which they subsequently divided between them. Today the Prussian Cultural Heritage Foundation owns approximately 13,000 photographs from the archive of Volk und Welt, the Berlinische Galerie somewhat over 3,500. The smaller but photographically more »valuable« collection of motifs belonging to the Berlinische Galerie has an overarching theme: relevance to the city of Berlin (either real or at least stated), whereas the collection of motifs belonging to the Prussian Cultural Heritage Foundation represents the quantitatively more significant and thematically more diverse portion of the former magazine archive.

The exhibited group of works by Alfred Ehrhardt from the collection of the Prussian Cultural Heritage Foundation shows us the original prints in the state in which they were archived by the Volk und Welt publishers and thus have been preserved for posterity: mounted onto to cardboard with hand-written captions, retouches, markings, stamps, stickers on the back side, and notes bearing publication and payment information.

Striations in the Wadden Sea Caused by the Wind, Architectural Arts of the Sea Snail, Magic of Precious Stones, Iron Blossom, Bronze Heads, Foals in the Pasture—presented on the walls and in display cases, these images show outstanding motifs in the photographer’s oeuvre. The careful selection of the best motifs within a series provides a representative cross-section of Ehrhardt’s work until 1944. The exhibition represents a complete spectrum of his chosen subject matter. The artist’s fascination for the beauty of the natural forms in the physical presence of nature is passed on to the viewer through photography. Today, as then.