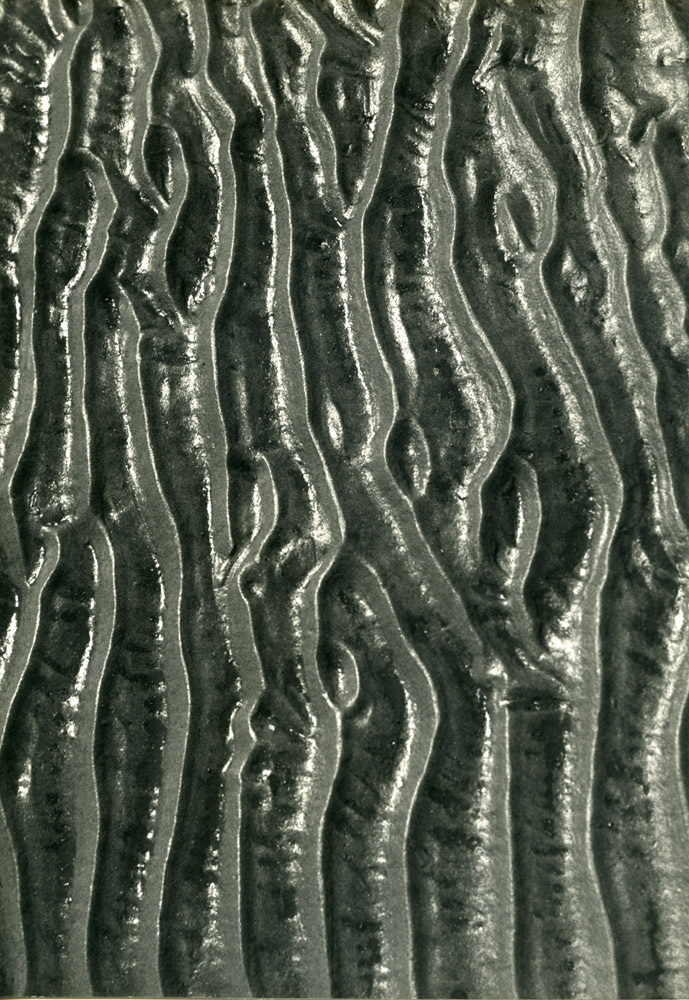 Preparations for this exhibition have been underway since the establishment of the Alfred Ehrhardt Foundation in the year 2002, and this presentation has finally be made possible by a purchase as well as a donation. Compiled exclusively from the foundation’s own collection, the show includes 70 vintage prints from the series Das Watt (The Tidelands) (1933–1936) and concentrates on Ehrhardt’s first major photographic work, which is among the most outstanding visual achievements of the avant-garde photography of the 1930s. It is the starting point for all of the prize-winning photographic and film work of this multi-faceted, Bauhaus-trained artist and represents the crème de la crème of his photographic oeuvre. The artistic quality of this series remains unequalled, even among the masters of the photography of the New Objectivity.

The reprint of the book Das Watt (The Tidelands) from 1937, as an exclusive facsimile edition by Éditions Xavier Barral, provides the perfect occasion for this exhibition. The publication is an ode to nature and a masterpiece of book art. It is not by chance that in 2004 it received international recognition in Martin Parr and Gerry Badger’s extensively illustrated volume The Photobook. A History: »This is both an attractively designed and finely printed book—an island of tranquil beauty in a cultural sea that was becoming increasingly barbaric.«

The work of Alfred Ehrhardt (1901–1984) spanned a range of media. He was church organist and choir director, composer, painter, and art teacher before he became photographer. After studying at the Bauhaus Dessau in 1928/29, where he was a member of the class of Josef Albers and an assistant of Vassily Kandinsky and Oskar Schlemmer, he established the first so called »Vorkurs« for material studies outside the Bauhaus at the Academy of Fine Arts in Hamburg. After being dismissed from his teaching position in 1933, he turned to photography and film. In Cuxhaven, where he took a job in his original profession as a church musician, he discovered the unique qualities of the ever-changing sea landscape of the tidelands before the islands of Scharhörn and Neuwerk. He was fascinated by the structures in the sand that emerged every day anew, formed by wind and water. These reminded him of his teachings on the nature of materials, in which his students were required to learn to discern the »structure, texture, and consistency« of materials. He soon realized that the camera was capable of innocuously producing images that were forbidden in paint. Instead of taking up the pencil or paintbrush, he now »rendered« the abstract forms of nature with the camera. Through the selection of his motifs, the choice of perspective, and a choreography of light, he elevated the treasures of »artist nature« to a human art form, which was on par with nature without being a mere replica.

Spreading out Alfred Ehrhardt’s photographs of abstract sand forms in the tidelands, one gains the impression of »chaos and structure.« The artist’s cropping of the images reveals the inherent beauty of the so many diverse forms that demonstrate the force of nature. However, when viewed as a whole, this variation of forms establishes a link between the micro- and macrocosm; it lends a system to the structures of nature and order to its chaos, as if the artist wished to make the world comprehensible through his chosen medium.

Alfred Ehrhardt was a neo-romantic influenced by the New Objectivity, a »natural philosopher with a camera,« as he was described at the time. His series Das Watt brings together the structural experiments of New Vision, the typological approach of the New Objectivity’s indebtedness to natural philosophy, his sense of composition, materials, and abstraction as well as a worldview influenced by Kandinsky, Schlemmer, and Klee that aimed to transcend the material through an expression of the cosmic and the spiritual. In setting aside the chaos of an industrialized world, in the contemplative concentration on empty landscapes defined only by the sky and the horizon, and in focusing on the hidden loveliness and symmetric beauty of the natural microcosm, Ehrhardt achieved with this series a work of utmost formal consequence and stirring simple beauty.