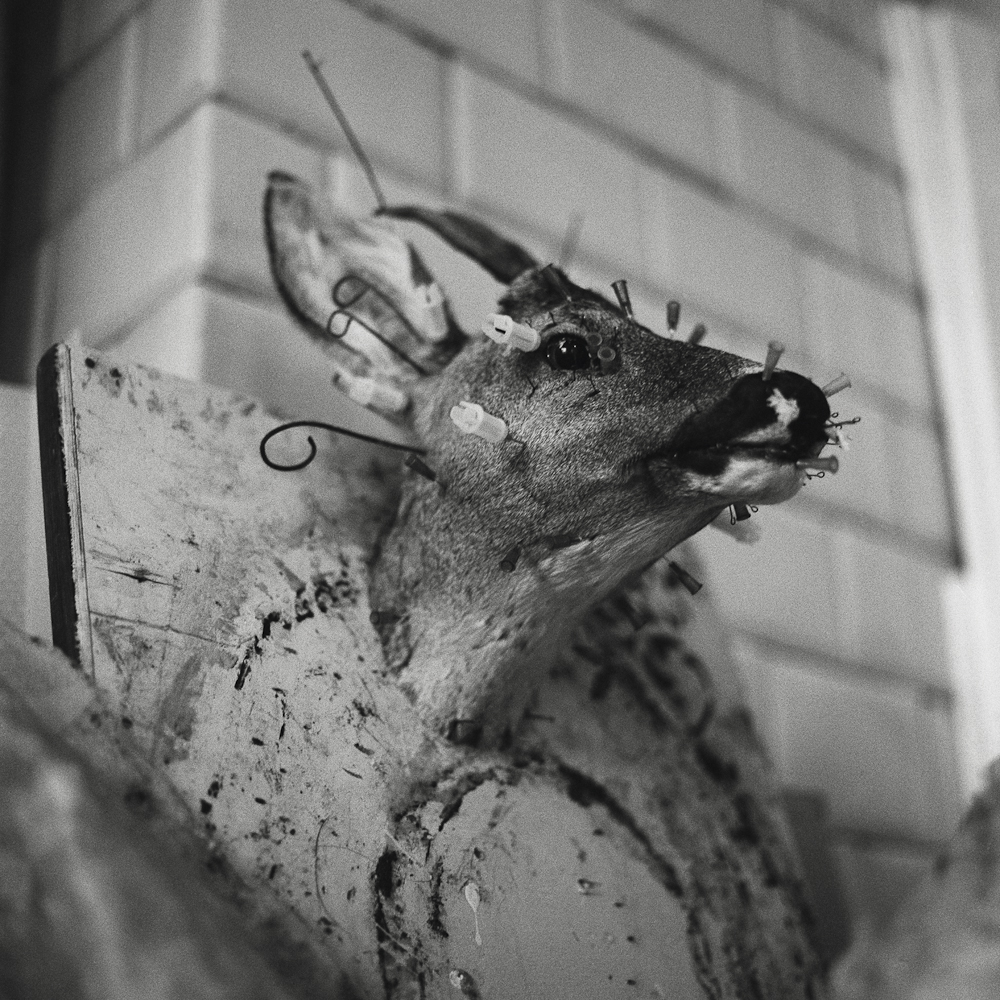 Naming a contemporary photography exhibition WILD, although it presents images neither of explicitly wild animals nor of animals gone wild can certainly be understood as an ironic gesture. The title of the exhibition plays on the instinct-driven and untamed aspects of our nature, which differentiate us, rational beings gifted in language, from animals.

Some animals are given mythical powers and are worshipped by us people. Others are subdued, slaughtered, overbred, and eradicated. Animals accompany us in the most important dimensions of our existence: social, economic, material, cultural, religious, and symbolic, all of which are reflected in contemporary photography. We encounter animals at home, in the woods, or in the zoo. We know them from images and films. We know them as toys and eat them for nourishment. Since Darwin also the human species has been considered a mammal in terms of evolutionary biology, and since then we have scientifically studied our and other animals’ family trees. Never before did people have both such an enlightened and alienated relationship to animals as we do today. The more that animals become objects of our thirst for knowledge, the more we seem to set ourselves apart from them.

We have been producing images of animals for thousands of years, and animals were among our earliest motifs, as we know from the caves of Lascaux and Altamira. Even with the invention of photography 30,000 years later the animal still remains a central subject matter of our imagery. However, more and more seldom are animals being photographed in their natural surroundings. Instead they are set in staged environments or personified as alter egos. No medium is so well-suited towards analyzing the relationship between people and animals as photography, which has a technical range, from the snapshot to digital rendering, capable of capturing all aspects of how we interact with animals. Numerous illustrated books on this topic have been produced by the most outstanding photographers of the 20th century, some of whom will have works on view at the Alfred Ehrhardt Foundation.

The exhibition itself focuses on recent developments. With over 70 works by more than 35 artistic photographers it will show the rich spectrum of our relationship to animals: closeness and distance as well as heartfelt friendship and material exploitation. These include images of prepared animals as museum exhibits, pets, and stuffed toys, livestock in a field, or dead animals as vanitas symbols in classic still lifes. As we see, an old topic is repeatedly used in a contemporary form of expression and gains new relevance. The photographs demonstrate to what extent humans identify with animals, collecting them as trophies or processing them as food. The different artistic approaches and visual languages vary, sometimes dramatic, sometimes playful and ironic. Ultimately, the exhibition causes us to ask ourselves how »wild« animals truly are today. Responding with a combination of fear and fascination, pity and horror, we recall that we ourselves are only part of the great mosaic of mother nature, playing our roles in the endless drama of being born, dying, acting as the eaters or the eaten.