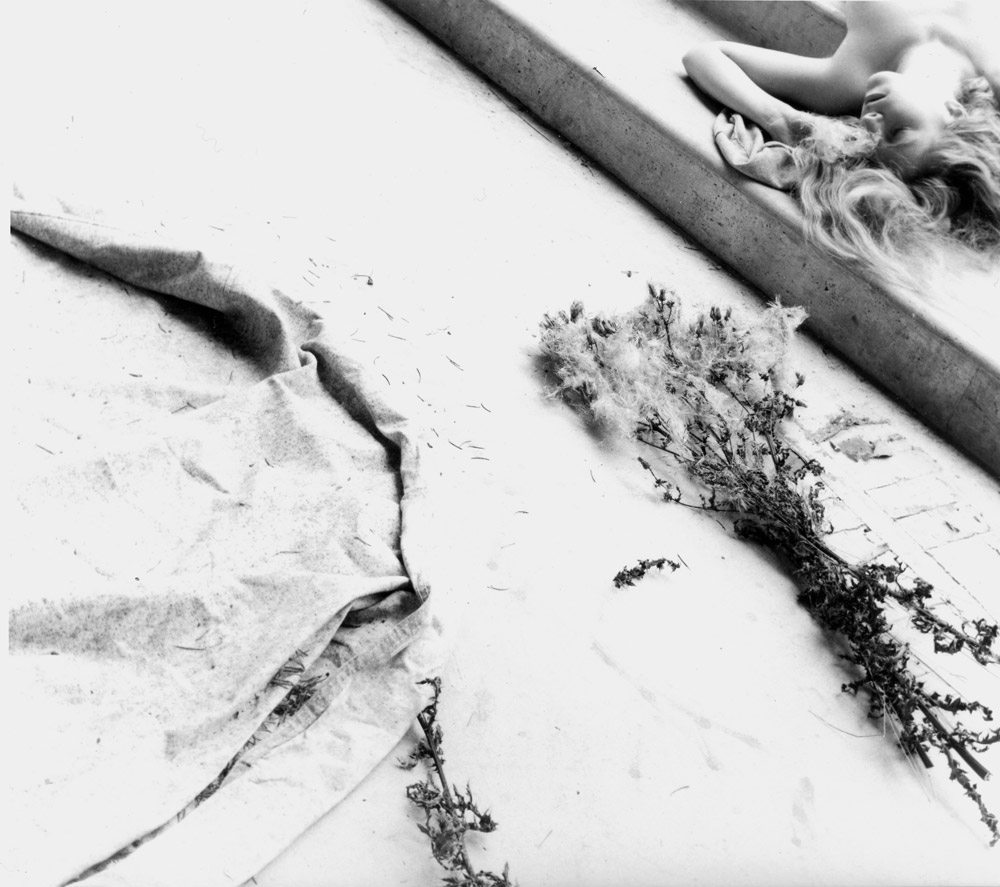 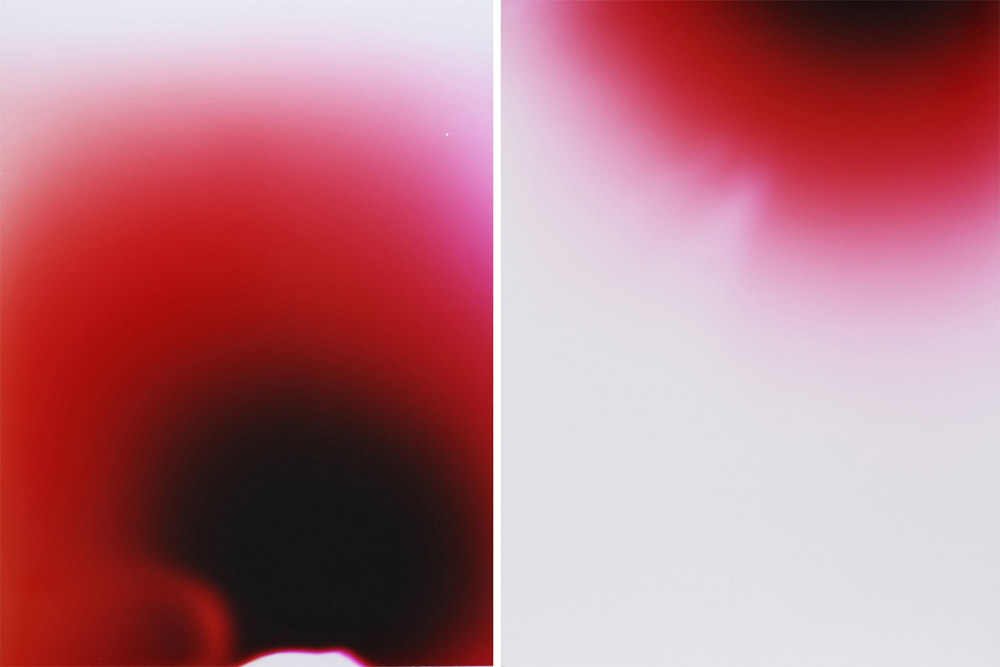 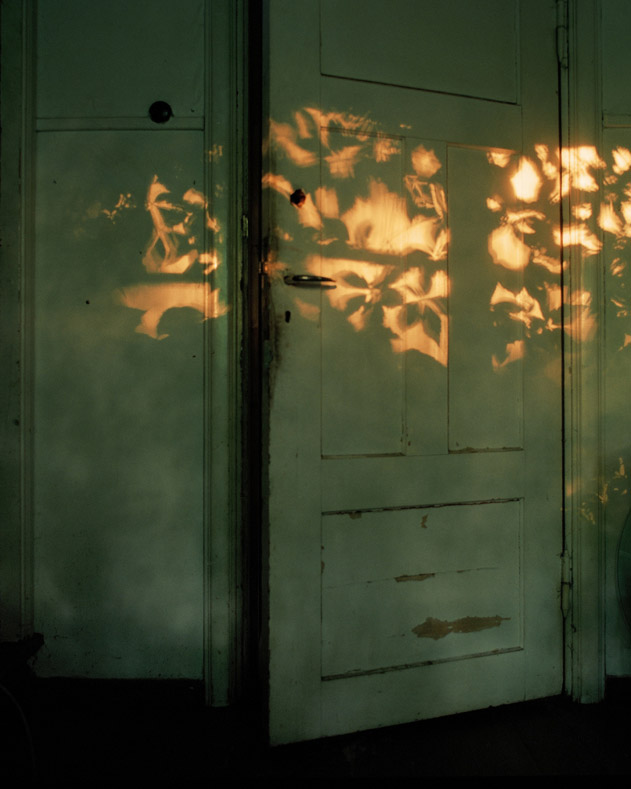 Ida Pimenoff, Untitled (Door), from the series A Shadow at the Edge of Every Moment of the Day, 2010, C-print, © Ida Pimenoff / Courtesy Kehrer Galerie

The group exhibition brings together photographic works on the theme of the ephemeral, momentary appearances and disappearances, and the fragile and transcendent. Common to all of them is a dissolution of their motifs—created by the use of soft focus, long-term exposures, and multiple exposures—which recede into the background to allow a certain pervasive mood to come to the fore. The photographs do not point to anything beyond themselves, even if we are able to recognize the forms of people, places, landscapes, or objects. What is shown manifests itself in the moment of disappearing. In many of the images this effect is fostered by mist or fog, which evokes a pervasive atmosphere and thus triggers an emotional approach to the image. The photographs confront the viewer, and in their ability to suggest presence, they give rise to an event or moment of feeling that viewers experience in their own imaginations and worlds of feeling.

The exhibition views the phenomenon of the ephemeral in contemporary photography through the works of a selected group of artists, whose photographs operate on the outer edge of the visible. The show includes images of nature, landscapes, interiors, and also portraits, with examples of various photographic techniques, such as the photogram, photogravure, and platinum print.

Danish photographer Adam Jeppesen (b. 1978) experiments with photogravure by applying ink to the printing plate only once, allowing the image to fade away to the point where only a seemingly blank surface remains. American Scott B. Davis (b. 1971) works with a large-format view camera, juxtaposing original-size platinum prints in diptychs of positive and negative views of a motif that recede into the blackness of night, or into the glaring whiteness of inversion. And Finnish photographer Sandra Kantanen (b. 1974) uses digital smudging and overpainting techniques in dissolving the surfaces of her mist-filled images in a painterly gestural style. László Moholy-Nagy (1895–1946) is undoubtedly considered one of the pioneers of camera-less photography; his experimenting with photograms began in the 1920s. Emerging out the dark surfaces of the triptych presented in the exhibition are shadowy traces of vanishing objects that oscillate between a visible surface presence and disappearing into an abstract spatiality. Helena Petersen (b. 1987) utilizes the mere milliseconds-long instant of a weapon firing for her series Pyrographie. The photographic paper is exposed solely to the flash of the muzzle and scarred in places by projected debris, inscribing the aggressive force of the shot in the images both visually and tactilely.

The ephemeral nature of man and his existence is the focus of a series of additional works. In their photographic self-portraits, artists Andrea Sunder-Plassmann (b. 1959) and Rita Ostrowskaja (b. 1953) both begin with their own bodies, which are made to vanish using long exposure times. The self-portraits of American artist Francesca Woodman (1958–1981) are also characterized by an underlying melancholic atmosphere and proximity to death. With excessive vigor she explores the limits and possibilities of the genre, playing with symbolically loaded props, imaging techniques, and extreme close-ups. Isa Marcelli (b. 1958), Bill Jacobson (b. 1955), and Donata Wenders (b. 1965) also work with the human figure, disembodied in their photographs in various ways. In all of these works a common mood pervades both figure and space in which the outlines of the self are blurred and disappear.

In her portraits of spaces, photographer Nicole Ahland (b. 1970) seeks to pick up on and experience moods and site-specific atmospheres. Her images are the result of an intensive »feeling out« of specific places, which enables her to sense what Theodor Lipps defines as Raumgefühl, the feeling of space. A poignant silence also characterizes the work of Finnish photographer Ida Pimenoff (b. 1977), who captures the specific mood of twilight in her images. With Ellen Auerbach (1906-2004) and Alfred Ehrhardt (1901–1984), derelict interiors vanish in tangible ways: »Traces of time and aging are what lend things the insignia of presence,« is how Gernot Böhme describes the specific atmosphere of the ephemeral, a »co-manifestation of existence.« This is especially evident in the previously unknown images of ruins of Alfred Ehrhardt, created shortly after the bombing of his Hamburg apartment building in 1942.

Clouds often serve as the subject of the amorphous and ephemeral, for instance, in the photographs of Pentti Sammallahti (b. 1950) and César Martins (b. 1981). Magical things often occur in the photographs of Finnish photographer Pentti Sammallahti, creating in the viewer the sensation of entering a dream world that exerts a magical pull. Here the sky is depicted from earth, but in the images of César Martins, the Portuguese-born photographer ventures up into the clouds to capture them from the sublime perspective of flying. Photographer Marianne Ostermann (b. 1950) concentrates on the ephemeral appearance of frost patterns. Photographed through icy windows, she develops the images as cyanotypes, blurring the motifs in a velvety blue. Blue as a color of longing defines Finnish photographer Jorma Puranen’s (b. 1951) image series Icy Prospects. His photographs of the Arctic landscape recall frozen dreamscapes. In actuality, the works are reflections of the landscape on a varnished wooden board—even the limits of reality, perception, and imagination are ephemeral, fleeting, and not easy to pin down.