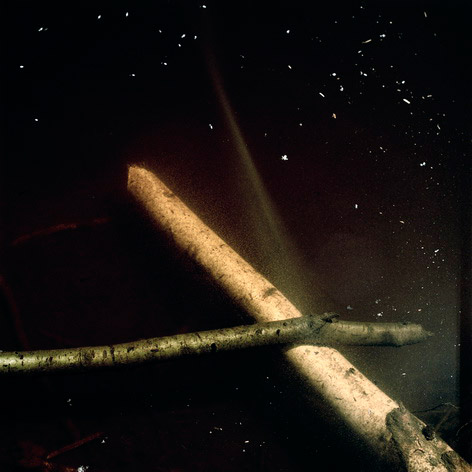 Canadian photographer Normand Rajotte has explored the forest region surrounding Mont Mégantic near Québec with his camera for many years. Instead of focusing primarily on the landscape of the forest, he has turned his attention to the ground, where he discovers the tracks made by animals of the forest. The series Comme un murmure (Like a Whisper) attests to this photographer’s intimate relationship with nature as it developed over time and his immersion in these surroundings during his wanderings. Particularly his photographs of animal imprints in damp soil recall the little-known photographs taken by Alfred Ehrhardt in the German tidelands from 1933 to 1936 of tracks made by sea animals. The exhibition Normand Rajotte: Empreintes / Alfred Ehrhardt: Animal Tracks is an encounter between the images of Alfred Ehrhardt and Normand Rajotte, who each dedicated their works to the surface structures of the ground and the patterns inscribed there by various forms of animal life.

Both Normand Rajotte and Alfred Ehrhardt are photographers who have explored nature—whether by hiking through the dense forest or crossing the expanse of the tidal flats. With the sharp eye of a tracker they each repeatedly combed the same territory, finding the markings made by animals and following them with their camera, which was pointed to the ground to capture the photographer’s discoveries in close-up. In Rajotte’s images of the snow, the markings of a bird or the rounds made by a coyote seem almost like drawings. However, he does not always simply capture the physical imprints left by the inhabitants of the woods, but in his images also the branches gnawed by beavers, the tadpoles swimming in muddy water, or the tubular spirals carved into the soil give us indications of the life taking place beneath the forest floor. His precise knowledge of the area gives rise to a sense of immediacy that is expressed in his images and that offers intimate insights into the natural realm. In Ehrhardt’s photographs the rhythmical formations in the tideland sands—created by the alternation of the tides and the tracks of seagulls, seals, or sandworms—sometimes take on a mysterious, abstract quality. The images are defined by Ehrhardt’s affinity to the structural studies of New Vision and his sense for composition, materials, and abstraction, which was indebted to his Bauhaus training.

From the very beginning the photograph itself was understood as an index or trace of reality, as an “emanation of past reality” (Roland Barthes). It thus permits things absent to appear present. It refers to something far away that manifests itself in the image and thus seems near. There is a mysterious or even uncanny element to the photograph, and a certain melancholy accompanies the image as a visual memory. Through their photographs Normand Rajotte and Alfred Ehrhardt open up and reveal a visual world that otherwise lies hidden.

Normand Rajotte began working as a photographer in the mid nineteen-seventies. During this period he was part of a movement in Quebec, which sought to achieve an aesthetic renewal of documentary street photography. Since the early eighties Rajotte has been focusing on landscape and nature photography, with which he has participated in numerous international solo and group exhibitions. Rajotte lives in Montreal and Estrie.

Alfred Ehrhardt (1901–1984) was an organist, choir director, composer, painter, and art instructor before becoming a photographer. After attending the Bauhaus in Dessau in 1928/29, where he studied with Josef Albers and assisted in the classes of Wassily Kandinsky and Oskar Schlemmer, he assumed responsibility for the first foundation course (»Vorkurs«) for material studies outside of the Bauhaus, at the State Art Academy of Hamburg. After being dismissed from his teaching position by the National Socialists in 1933, he began working in photography and film. In the tidelands off the coast of the islands of Scharhörn and Neuwerk he discovered the unique qualities of the ever-changing landscape of the sea.