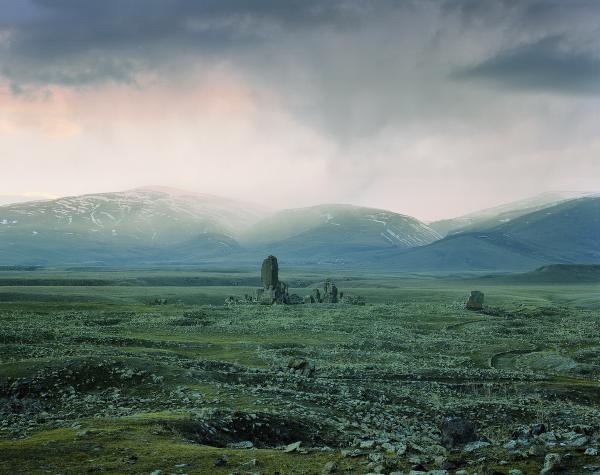 Jörn Vanhöfen’s pictures bear witness to the metamorphosis of material; to both small and gigantic upheavals. The melting of the glaciers cannot be prevented, not even by cleverly applied layers of insulation. Areas of the earth are now being exposed that were covered for thousands of years. New continents make their appearance while vast tracts of coastline are about to vanish from the map. But this future is not an apocalyptic vision, but rather a vision of Nature that will inevitably re-conquer its domain in some future post-human era.

Not only Man himself, but the works of Man will also return to dust. The inorganic part of Nature is no exception to the general cycle of creation, decay and re-creation. The planet earth will survive as long as these processes continue, as long as stone is formed, eroded, dispersed and formed anew. The dams, tunnels and other developments in inaccessible areas such as the Alps may still stand firm, their gigantic monoliths may still protrude like foreign bodies or may merge harmoniously into the mountain landscape, but their final fate has nevertheless already been etched into their surface. Just as concrete and asphalt were formed of ground up stone, so they will be transformed to rubble again – sooner or later.

Optimistic metaphors for the natural cycle of construction and deconstruction were already set out in Vanhöfen’s series Disaster and Aftermath where human constructions break down into small pieces from which new things will be made. Compositions that often rely on symmetry, compositions that produce monumentality and grandeur; both point to the re-circulation of all things. Although one remains ignorant about the background content and is left to imagine what might be missing.

Vanhöfen sometimes uses pictorial devices of the Romantic period without producing romantic pictures. In the tension-filled interplay of terror and beauty and the interplay of horror and seduction, it is the aesthetic pattern of beauty that casts its spell on the observer and delivers the content. The seductive elements still horrify – even when their touches of grandeur turn out to be an intentional false trail. This is where the foundations of Jörn Vanhöfen’s pictorial language lie. A supra-individual documentary photography, with a detached point of view that demands empathy. A sober description of historical blunders, without drawing a moral. The critical vision of a future that does not end in an apocalypse. Sublime landscape compositions with subtle colouring devoid of cloying sentimentality. The combination of areas of local small-scale texture to form a unified whole. The lively contradiction of tension-filled peace, encompassing all that is, all that was and all that is to come.