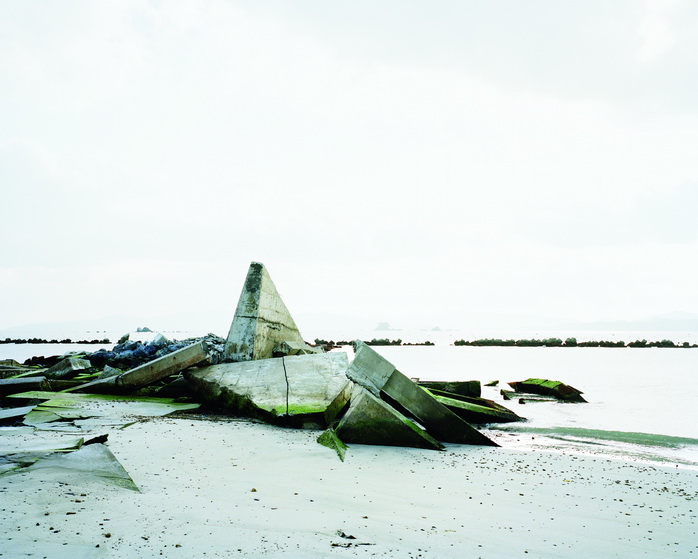 In many of his earlier series Hans-Christian Schink dealt with the contrast between nature and culture, where man seems to be more powerful than nature, which falls victim to civilization. With the series Tōhoku, made in the Japanese region of the same name one year after the disastrous tsunami, Schink makes a U-turn and shows that it can also be the other way around. In comparison with his earlier visual constructions where the absence of people was a result of selection and perspective, here human life is obliterated through the brute force of nature.

A post-apocalyptic mood settles over a picturesque snowy landscape that evokes the beauty of Japanese woodcuts. It is as if the landscape is frozen. A thin layer of snow covers the traces of the catastrophe that are still just latently visible. Plains scoured bare, on which coastal cities had earlier risen, remain in a moment of torpidity. Through the unfathomable stillness, the unreality and reverie that Schink’s images exude, the catastrophe can be felt almost physically. Drawing on strategies of romanticism, Schink’s imagery blends the horrors of natural dramas with an aesthetic pictorial composition and a vibrant expression of the sublime. The narrative potency of the vast landscapes is strengthened by a sensation that is a mix of fascination and menace.

The water thrusts houses, boats, and cars like toy figurines forward and deposits them haphazardly in various inland locations. The giant concrete supports built by the coast guard are wildly, chaotically jumbled as if they were made out of Styrofoam; a red wooden Buddhist temple seems to be ripped from its foundation by a giant and left at the edge of a forest in one piece; a bus »parks« on top of a house; and a fishing boat lies stranded in the middle of a rice field. Indebted to the topographical style of Bernd and Hilla Becher, an evenly pallid light suffuses frontal, diagonal, or lateral compositions of remaining ruins of houses, which are captivating in their sculptural beauty. Interspersed between the extensive landscape panoramas these photographic inventories of destruction create a poignant lack of immediacy owing to the distancing view.

»Even in the at-first innocuous photographs one feels intuitively an underlying tension, a kind of phantom pain in the places where people had previously lived and where their houses had stood,« writes Denis Brudna in a review of Hans-Christian Schink’s book Tōhoku (Hatje Cantz 2013). But there is relief. Soon one discovers tiny people in some of the photographs, like the surfer on a beach amid falling snowflakes. Though the signs are minimal, the message is clear: life goes on.