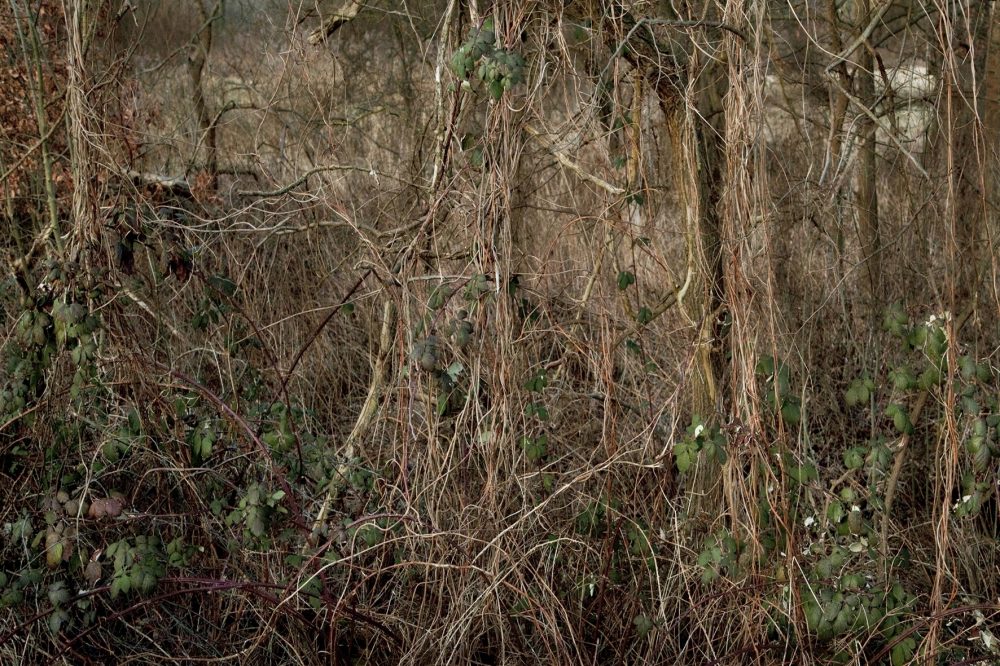 The quiet, almost monochrome photographic works in the new series Winterwald by Emanuel Raab show the multiformity of a natural space that is revealed only in the winter manifestation. The reduction of the portrayal strengthens concentration on the aesthetic design of the pictorial elements, which veer into abstraction. A tangle of wildly rampant branches and twigs conjoins to become a pattern that stretches like braiding or spider webs across the forest landscape lying behind. The graceful lines intertwine like a delicate drawing with the detail-rich surface structure; after protracted perusal, the chaos falls to order. In all objectivity, in the subtly composed forest images a romantically suffused understanding of nature pierces through. With the photographic composition following painterly premises, nature is described as an enigmatic place and the forest transformed into an animated landscape.

Forest in Germany is not just a natural space of changing societal and economic uses and interests, but an identity symbol through and through. There is barely a German fairytale, folk narrative, or German legend without its forest. The painters and poets of the Romantic Age in particular elevated the German forest to a landscape of the soul and invoked the image of untouched, enigmatic nature. The forest became a place where city-dwellers’ yearning for nature blended with the origin myth of impenetrable primeval forests. Despite the real threat posed to forests through forest extinction and growing commercial interests, the notion of the forest as a holy place and refuge for isolation and self-discovery lives on.

Emanuel Raab’s series Winterwald ties in with these ambivalent notions of nature. His images of apparently impenetrable nature appear to be entirely carried away from reality and full of mystery. A melancholy poetry overlays the hibernal scenes, in which the germ of the next awakening slumbers virtually unnoticed beneath the surface. At the same time a latent threat, impossible to locate with any certainty, shines upwards in the thicket of nature. One is likely to go astray here, sometimes even get lost. Nothing is ordered according to human needs, nothing indicates a path. The primeval is still mighty in its archaic presence and has outgrown the human dimension. Once one has arrived in the depth of the forest, the collective images of its mythical history involuntarily come alive.

Starting from his photographic blueprint of atmospheric landscape images, he sketches a kind of typology of the natural. As the winter landscape is contemplated a surprisingly detail-rich system of shapes and structures is revealed, disclosing the forest’s essence.  Behind the apparent monotony of unleafed branches, undergrowth, and scrub, the multiformity of nature, following its own logic and laws, unfolds. With the popular understanding of ‘dead nature’ the artist contrasts the almost inexhaustible diversity of organic manifestations and, in this manner, carries off the beholder in the twofold sense into a hidden sphere of a world that is supposedly familiar to him.