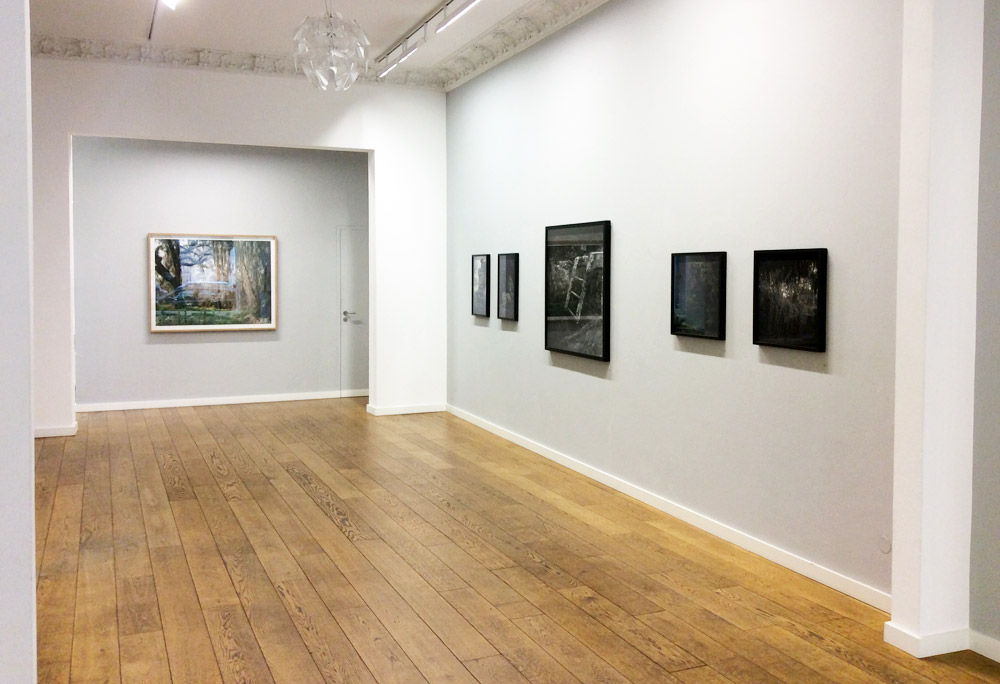 Presenting 25 works dating from 2000 to 2013, the Alfred Ehrhardt Foundation presents an artist who draws from the influences of Romanticism and Surrealism in his contemporary explorations of landscapes and nature.

After living in Paris for many years, Andréas Lang returns to Germany in 2001. Engaging in a search for his intellectual roots, he begins to explore the significance of history, mythology, and the landscape in Europe. He follows the traces of German Romanticism and rediscovers his native region on the border to France, a place haunted by historic events. This results in further works on Europe and an artist residency in Poland. He travels throughout the Near East and the landscapes of Christianity and the crusades which inherently carry the ambivalence of holy land/holy war. Since 2010 he has been working on a long-term project on German colonialism that follows his grandfathers footsteps and German colonial history to Cameroun. Often kept in dark, black-and-white tones, Lang’s images hint at abysmal chapters of European history, whereby his reserved pictorial language has a timeless quality. His auratic landscapes evoke the projections and internal images of our collective memory.

In my work I examine the different layers of history, mythology, and the present as a means of enabling a narrative image. A form of visual archeology, at times blending or colliding with immanent social, political, and ecological realities. In this way the picture becomes also a place for the imaginary. It often appears like a film set, existing in a state of limbo somewhere between reality and imagination, past and present. I mostly work with analogue photography and use classic film material. (Andréas Lang)

Andréas Lang attempts to fathom the sometimes visible, sometimes invisible »genius loci,« or »spirit of a place.« Europe is pervaded by both historical and religious/cultural markers; its landscapes are by no means innocent. However, the works in Lang’s series Seelenlandschaften Europas (Europe’s Landscapes of the Soul) are not always topographies with histories like that of Verdun or Poland, where the traumatic events of World War I and II are still palpable, even if not always visible; or like the landscapes extending between Israel and Sinai, where crusaders waged a holy war in the name of God; or like those of Syria and Turkey, where the traces of the expulsion of early Christians are still evident. Lang’s soulful images also touch on legends, myths, dreams, or buried memories of childhood, which cannot always be rationally understood but exist as sensations or experiences. For this reason the images are constructed in a manner that inspires our imagination. His dusky, stage-like scenarios and sparing use of light often convey something unsettling, uncanny, puzzling, mysterious, but also familiar. We are suspended between dream and reality, beyond time and space in a metaphysical realm, where appearances are not what they seem, and we try to see beyond the surface. In his images the experience of light is mediated by darkness. During his trips to India Lang studied Far Eastern philosophy; while in France he explored Surrealism, and once back in Germany Romanticism. During the period in Paris when his photographic pictorial vocabulary matured, he was particularly fascinated by the fairytale-like, surreal worlds in Jean Cocteau’s films. The glowing surface of water in Orphée refers to the mirror that Orpheus crosses through in order to reach the realm of the dead, in order to bring back Eurydice into the world of the living. The »the actual images are produced beyond the image—as a ›mental space‹—indebted to the vision of the artist and that of the viewer« (Jeannette Zwingenberger). Like Orphée, we enter Andréas Lang’s images from the visible of the here and now, moving into the invisible of hereafter. In the early 2000s, when Lang returned to Germany, his encounter with the works of Caspar David Friedrich was a seminal experience. Until then he had viewed the rising nationalism of the Late Romantic period in the second half of the nineteenth century as the cause for the catastrophes of both World Wars, the aftermath of which is still felt in the inner conflicts of Europe today. Around the most recent turn of the century the term »homeland« was once again debated in a context beyond its previous Nazi connotations. Lang’s engagement with Novalis and Caspar David Friedrich’s worldview opened his eyes to the dimension of the transcendental in the history of Europe, which carries a more reconciliatory tone than the notions of geography or nation building. In his stage-like compositions, borrowed from the study of painting, the human figure is present in its absence or projected into the image on the part of the viewer. As in the paintings of Friedrich, whose experience of nature and the history of a place assumes all sort of dimensions, both the past and present, the mundane and other-worldly, the real and mystical, the earthly and the realm of the dream are one.