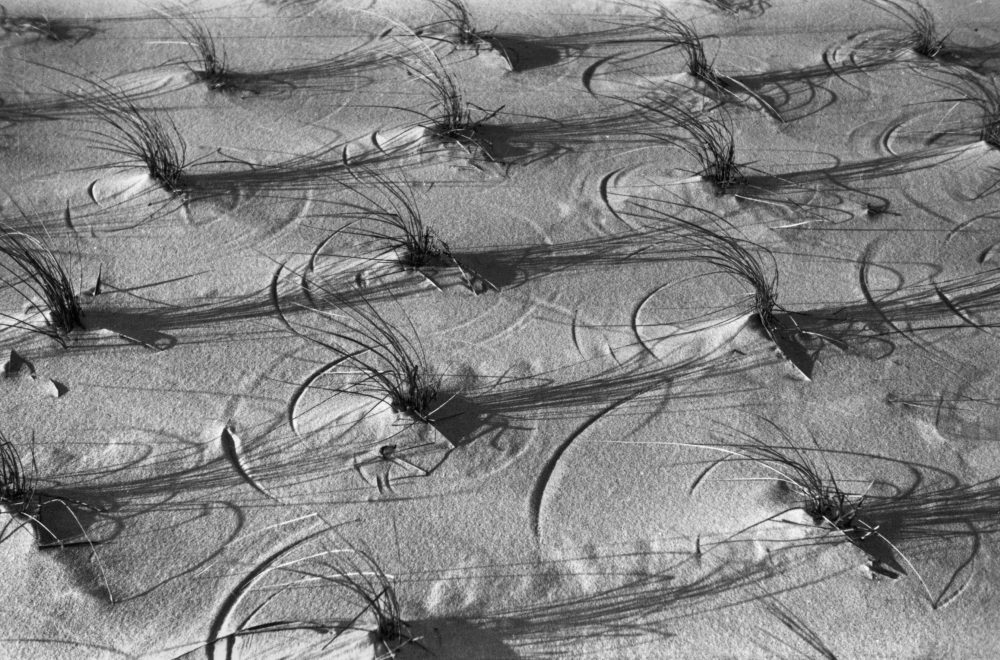 Up until now the photographs of Arvid Gutschow (October 2, 1900, Hamburg – May 14, 1984, Seebergen near Bremen) have only been known to a small circle of experts. As a doctor of law, Gutschow was originally employed as an executive administrator in the city government of Hamburg. His father, a passionate hobby photographer, introduced him to photography, and Gutschow began to photograph the landscape surrounding Hamburg at an early age.

He was particularly interested in structures and forms of nature, such as light reflections on water surfaces or the patterns left by the wind on beaches and dunes. Gutschow was also interested in factory complexes and industrial buildings as a new kind of photographic subject matter.

In 1929 Arvid Gutschow was included in the seminal exhibition of the German Werkbund FILM UND FOTO in Stuttgart, which also toured internationally. His photographs were published in various magazines and newspapers in the 1920s and 1930s, including Der Querschnitt, Atlantis, Koralle, Das Deutsche Lichtbild, and PHOTOGRAPHIE Arts et Métiers Graphiques. It is remarkable that he was able to engage in active photographic journalism and attain such a high level of photographic achievement while fully employed.

Arvid Gutschow became well known through his photographic book See Sand Sonne (Sea, Sand, Sun), which appeared in 1930 with the Gebrüder Enoch publishing house in Hamburg. Including 75 photographs of the sea, watt, sand, dunes, and coastal plants, this early publication is among the stylistic forerunners of photographic books of abstracted landscape photography; it was also considered particularly progressive in terms of its layout. The photographic volume was a source of inspiration for further books on the ocean, sea, and dune landscapes in the 1930s. The largely abstract images of sand and water formations by Gutschow reflect his clearly ordered and structural eye for composition, which is also characteristic of Ehrhardt’s photographs of sand formations taken between 1933 and 1936 in the watt near Cuxhaven and in the Curonian Spit. Gutschow’s images have a compositional and formal stringency that is also carried through in his later landscape and technical photographs; in 1956 the well known Hamburg photo historian Fritz Kempe described his work as follows: »Gutschow…cultivates: the art of confining, abstracting, and compressing. This is complemented by his brilliant technique….Out of the continuous vitality of nature springs the strength for the conceptual exactitude of his photography.«

Arvid Gutschow (1900–1984) grew up in Hamburg-Blankenese. His father familiarized him with the medium of photography at an early age. After graduating from high school, Gutschow began to study law, and after completing his doctorate Gutschow entered state service for the district of Hamburg, from which he chose to retire in 1948. He pursued photography in his spare time, working at an exceptionally high niveau. Through the mid 1950s he continued to develop a body of photographic work. Following his early retirement he dedicated himself intensively to agriculture, environmental issues, and the problems of developing countries.

Alfred Ehrhardt (1901–1984) worked as an organist, choir director, composer, painter, and art educator before becoming a photographer and documentary filmmaker. After a period of time at the Bauhaus in Dessau in 1928/29 he directed the first foundation course for the study of materials outside of the Bauhaus, at the State Art Academy of Hamburg. After being fired from his teaching position by the National Socialists due to his modernist approach to art, he turned to photography and film. He became interested in the geographical formations of the watt, traveled to Iceland, photographed crystals, mussels, and corals, and worked in micro photography. Architectural photography and photographs of sculptures were additional emphases in his oeuvre.