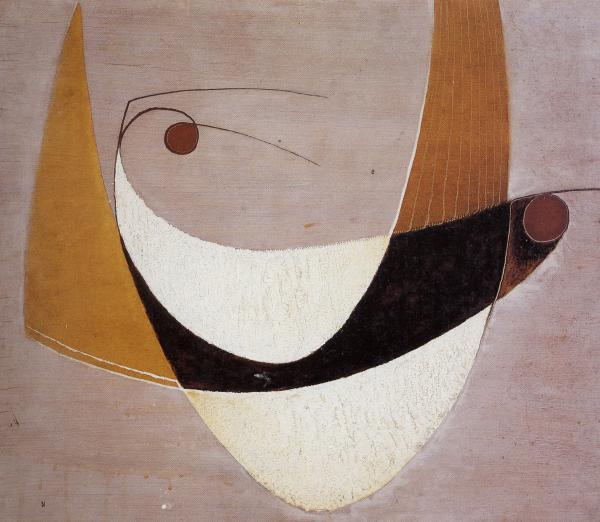 Alfred Ehrhardt was an artist with a wide range of talents. He was an organ player, a choir director, a composer, a painter, and art educator, before he became a photographer, documentary filmmaker, and film producer—a professional shift spurred by the National Socialists dismissing him from his position at the State Art Academy of Hamburg (Hamburger Landeskunstschule) in 1933. Only in recent years have his paintings and drawings, shown in a comprehensive solo exhibition at the Hamburger Kunstverein in 1931, been accessible to the public. It is therefore all the more fortuitous that a selection of Alfred Ehrhardt’s paintings, drawings, and prints will be on view for the first time in Berlin. The first part of this exhibition is dedicated to his early works. A second exhibition in the Bauhaus centennial year of 2019 will focus on the influence of the Bauhaus Dessau in his work.

Alfred Ehrhardt was originally a teacher for music, rhythmical gymnastics, and art at a progressively oriented school, which represented one of the most sophisticated and innovative educational experiments of the 1920s due to its innovative program guided by the avant-garde ideals of the Weimar Republic era.

In 1926 the twenty-five year-old Ehrhardt was commissioned with the painting of the crypt of the convent church of Lamspringe, the largest church of northern Germany from the Baroque period, where he created an extremely complex series of images. His ceiling murals were largely destroyed and painted over by the National Socialists in 1938, for whom its style, inspired by the New Objectivity, was too modern. These murals have now been uncovered and restored. Ehrhardt’s pastels from this period evince the stylistic influences of Expressionism and New Objectivity. A number of his colored woodprints with mountain motifs recall elements of Cubism with their reductive lines and surfaces. They also have aspects resembling Wenzel Hablik’s »crystalline structures« from the period shortly after the turn of the nineteenth century. Hablik’s formal language and that of his colleague Bruno Taut, a member of the artist group Gläserne Kette (Crystal Chain), echo even more clearly in his etchings. In a number of prints, borrowings from stylistic vocabulary of Franz Marc are obvious, an artist who served as an important influence for Ehrhardt during his formative experiments in painting.

A fateful change for Ehrhardt took place in 1928, when the director of his school sent him to the Bauhaus in Dessau for a semester for additional training. He not only took part in Josef Albers’ required preliminary course and met Wassily Kandinsky, Paul Klee, Oskar Schlemmer, and Lyonel Feininger, but he also served as a trainee and assistant teacher. Returning to his progressively oriented school, Ehrhardt applied Albers’ teachings on the properties of materials to his work with his students—a kind of experiment that would be unimaginable today but was successful at the time. This experience led to Ehrhardt’s appointment as a teacher for the study of materials at the State Art Academy of Hamburg in 1930, which he held until being fired in 1933. After this Ehrhardt never again worked with a brush or pencil.

The works of his Bauhaus teachers had a clear influence on Ehrhardt’s oeuvre. However, despite his close reliance on their stylistic vocabulary, with his subtle and delicate painting technique he developed his own visual language, based on a sparing use of line and elements of composition: »The unique character and power of the hand-drawn line determines the nature of the creative composition. This process represents the principle of stylization« (Alfred Ehrhardt). His material treatment of the surface reflects the exercises of his foundation course and also to the use of thick, impasto paint, which he manually shaped with the spatula or brush to create a surface texture. For Ehrhardt, abstraction is only a means of freeing the images found in nature from all inessentials. The majority of his paintings remain representational; the outlines of people, animals, or landscapes are indicated in an emblematic manner. The fundamental symbolism linking his images is the element of water. Fish, nets, sailboats, or wave-line movements appear consistently in his imagery. Also the creatures of the land and sea serve as underlying motifs. »From the exemplary to the archetypal«—this motto of Paul Klee ripens to perfection in Alfred Ehrhardt’s compositions.