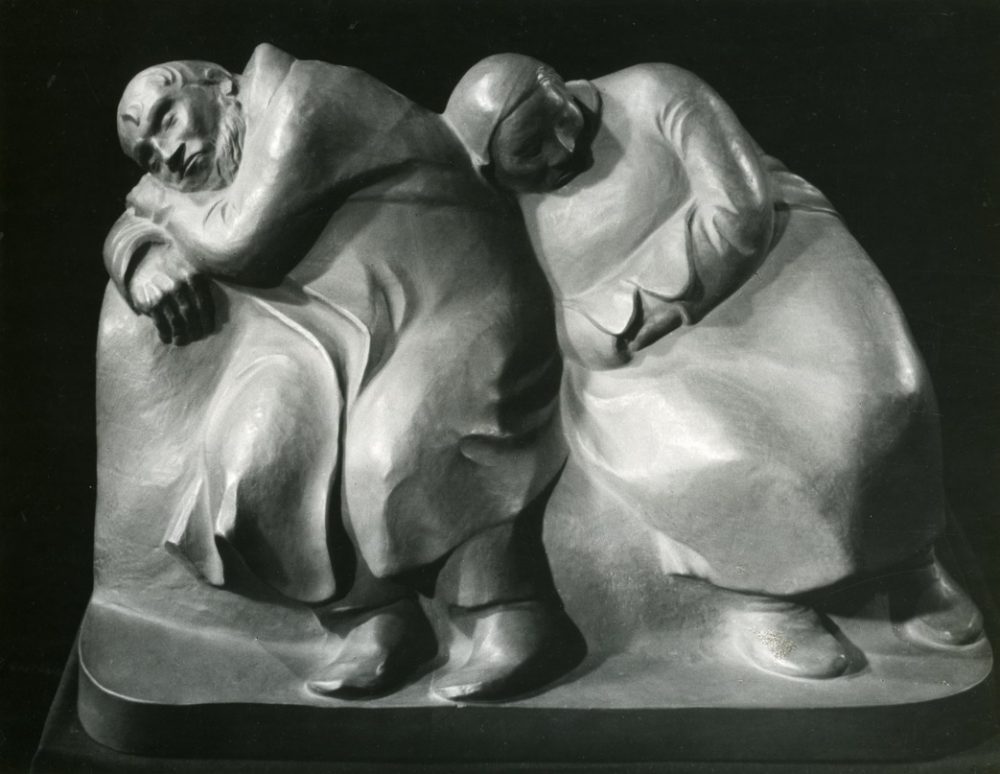 In 1948 the photographer and filmmaker Alfred Ehrhardt (1901–1984) founded his own film production company for so-called Kulturfilme, documentary films intended for a broad audience, with the support of the British occupation authorities. Among his first post-war productions were a film about the Bordesholmer Altar in Schleswig and a two-part film about the life and work of the German sculptor, graphic artist and author Ernst Barlach (1870–1938). Included in the exhibition are both the two-part film on Barlach and photographs from the series that Alfred Ehrhardt produced in parallel with the filming.

»More than hardly any other creative artist of the present, Ernst Barlach himself experienced the core situation of modern man, examined it in depth and conveyed it artistically in his work. Seeing his work, experiencing it and interpreting it in a reverential manner is a necessity in respect to the modern state of humanity and a duty in respect to Barlach,« wrote Ehrhardt in 1949, the year the film was premiered. Producing a film on this subject matter would have been impossible before 1945, because Ernst Barlach was banned from exhibiting his work by the National Socialists as of 1937, and one by one his public works were removed and destroyed. The first part of the half-hour films is called Der Kämpfer (The Fighter) and is dedicated to Barlach’s early work, which deals with human existence in the modern era, with the isolated individual, with his fear, feelings of terror and, ultimately, death. For example, Ehrhardt initially films the forward-rushing figure Rächer (The Avenger), with which Barlach responded to the outbreak of the First World War in 1914, from a slightly tilted camera position. In the last shot he interprets the figure’s aggression by turning the camera to allow the axis of the figure’s movement to directly confront the perspective of the viewer. Ehrhardt choreographs this subject matter in such a way that Barlach overcomes this one of »life’s demons« and finds his way to the salvation of figures in the sculpture Christus und Thomas (Christ and Thomas). Produced in 1926 from nut wood, the carving becomes a signet work marking the transition to his second, late period: Thomas with his tortured, doubting and beseeching face is characteristic of Barlach’s early period, while the serene expression of Christ looking off into the distance is emblematic of Barlach’s later period, which began in the mid 1920s.

The second half of the film is dedicated to this period and bears the title Der Überwinder (The Vanquisher). The film is dominated by the themes of the victory of evil, making peace with oneself and, finally, salvation. For the most part Ehrhardt revisits Barlach’s major series, such as Wandlungen Gottes (The Transformations of God), Gemeinschaft der Heiligen (Community of the Saints) and Fries der Lauschenden (Frieze of Listeners).

The film purposely avoids any words of explanation. Instead, the first segment of the film is accompanied by the second movement of Tschaikowsky’s Symphony No 2, and the second segment by the music of Anton Bruckner. For both parts Alfred Ehrhardt was responsible for the screenplay, direction, camera and editing.

For Der Kämpfer, part one, described as »particularly valuable,« Ehrhardt received a national film award and the first prize at the International Film Festival of Sao Paulo for »best photography.« At the XIth Film Biennial in Venice in 1950 Ehrhardt won the first prize in the »art category,« although at the time German directors living outside of Italy were only infrequently given an opportunity to participate. As the critic Fried Maximilian noted on September 29, 1949 in the newspaper DIE WELT, Ehrhardt used »light masterfully, in such a way that all movement proceeds from it. It glides over the edges and curves of the work and either enhances or softens the depth and expression of the work to leave the viewer breathless from its oscillating rhythm.«